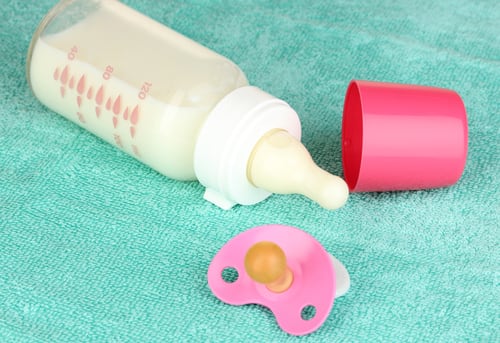 With all the scientific research touting the virtues of breast milk, the precious liquid has become a commodity. In a modern twist on the wet nurse, an increasing number of new moms have begun buying breast milk online via several U.S. websites created for the purpose of connecting nursing mothers who have an overabundant milk supply with new moms struggling to produce enough for their infants. But a recent study of breast milk bought online found that purchasers’ desperate attempts to provide their babies with the fluid’s profound health benefits could backfire in a big way.

After anonymously buying 101 samples of breast milk from classified ad-type postings at a popular milk-sharing web site, researchers at Nationwide Children’s Hospital in Columbus, Ohio, tested it for purity and found that 74 percent of the samples were tainted with illness-causing bacteria. “We found that three-quarters of the milk we studied was contaminated either with high levels of bacteria or certain disease-causing bacteria like the kind found in human waste,” says lead researcher Sarah Keim, PhD. Among the contaminants found were staph, strep, salmonella, and e. coli bacteria, organisms which Keim says could cause anything from mild diarrhea to infant death.

The study results indicate that many breast milk sellers don’t follow advice provided by the milk-sharing sites about safe breast milk collection, storage, shipping and provider screening. “Hygiene and shipping practices were often compromised,” said Keim, whose team deduced that some of the contamination resulted from poor hand hygiene, unclean containers and unsanitary breast pump parts. When shipping, 19 percent of the sellers didn’t even include dry ice or any other means of keeping the milk cold, so it was warmer than the temperature recommended for storage, encouraging bacterial growth and spoilage.

The samples were compared to 20 samples from a breast milk bank, one of 12 nonprofit facilities in the country that follow the Human Milk Banking Association of North American guidelines to provide pasteurized milk from carefully screened donors to qualifying fragile and sick infants. Even before pasteurization, the milk bank samples were less likely to contain several types of bacteria found in the breast milk bought online and had lower bacterial growth in many instances.

A bodily fluid, breast milk can transmit infectious diseases. Even a small amount of an impure supply can have a catastrophic effect, especially on preterm or medically compromised babies. Besides bacterial contamination and viruses, like HIV, breast milk bought online could expose your infant to chemical contaminates or drugs. “Based on our research, it is not safe to buy breast milk online,” says Keim, “and the Food and Drug Administration recommends against sharing milk obtained in that way. Recipients are not able to determine for sure if the milk has been tampered with, or contains harmful drugs or pharmaceuticals, or if the information the provider supplied about her health was truthful.”

The researchers recommend that new moms seek help from a lactation consultant at a hospital, clinic or community-based support organization early and often to establish and maintain a plentiful milk supply.