Will Your Baby Have an Innie or an Outie?

Throughout pregnancy, expectant parents can’t help but speculate about their new baby. Will she look like mom? Will he have red hair? The most minute details of your child’s appearance are fascinating, right down to their baby belly button. Typically, belly buttons fall into one of two categories: “innies” and “outies.” But, can you tell which type your baby will have? Here are all the facts you need to know about baby belly buttons.

What is a Belly Button?

The belly button serves an integral function when the baby is in utero. The belly button is essentially the place where the umbilical cord attaches the baby to the placenta, providing oxygen and nutrients vital to growth while removing waste like carbon dioxide. 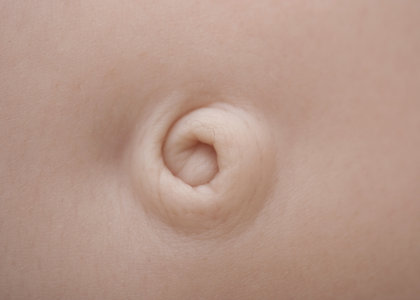 Birth and life mystery in a little helix curl of child belly button.

Once the umbilical cord falls off, the belly button serves purely a cosmetic function. Innie belly buttons are most common as approximately  90% of the population has them, while 10% have what is commonly referred to as outies.

Most of us have an innie belly button that resembles a large dimple and doesn’t extend beyond the natural plane of the stomach. An outie is far less common. Rather than a dimple, an outie belly button looks more like a knot, resulting from the scar tissue simply growing outward instead of inward.

Which Will It Be?

Many people mistakenly believe that the belly button’s shape is determined by how the umbilical cord is clamped and cut, how the cord stump is cared for after birth, or simple genetics. In fact, there is no evidence that any of these things are true.

In all likelihood, your baby will have an innie, and while most outie belly buttons pose no cause for alarm, they can be indicative by a mild, underlying medical condition. 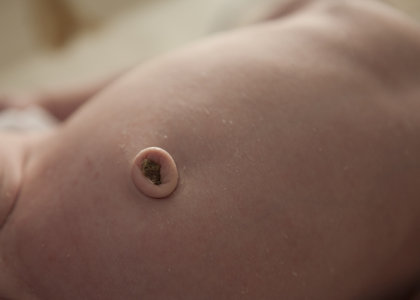 Occasionally, an outie belly button can be a sign of an umbilical hernia, an umbilical granuloma, or infection.

An umbilical hernia is relatively common in newborns. It occurs when a small portion of the baby’s intestines or abdominal lining protrudes from a tiny hole in the abdominal wall. Most umbilical cord hernias resolve themselves by the time a child is 4 or 5 years old.

Often, the hernia is diagnosed at birth, but sometimes it isn’t noticed until later when a baby cries, laughs, or sneezes, increasing pressure in the abdomen and making the hernia more prominent. Suspicion of an umbilical hernia doesn’t warrant an emergency call to the pediatrician, but you should consult your doctor during the baby’s next check-up.

In addition, the umbilical stump infection can promote the growth excess of scar tissue, resulting in an outie belly button.

Pediatric healthcare professionals recommend ‘dry cord care’ technique, meaning that you should keep the umbilical stump as dry as possible while waiting for it to fall off. Stick to sponge baths when you first bring your baby home until the umbilical stump has dried to reduce the risk of irritation and infection.

Avoid using alcohol to clean the stump. Soap and water work are the best options, and ensure you let the area air dry thoroughly to prevent a build-up of moisture. Pay attention to the stump when diapering to avoid irritation to your baby’s skin. Fold down the top part of the diaper, so the umbilical stump is exposed until it falls off.

Always be cognizant of anything that appears unusual, however. If you notice redness, swelling, or rash around your baby’s belly button, contact your pediatrician in case of infection.

How Long Until The Stump Falls Off? 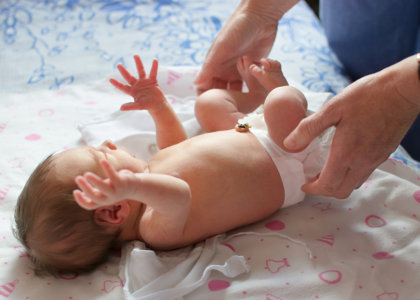 Your baby’s umbilical stump typically falls off naturally within two weeks of birth. Anything over 3-4 weeks is considered delayed and may require a visit to the pediatrician.

Can a Belly Button Shape Change Over Time?

It is not unusual for your baby’s belly button shape to change over time. If your baby is born with an umbilical hernia, her outie may become an innie over time, as the hernia corrects itself. Similarly, a rare undiagnosed hernia that presents later in childhood can change an innie to an outie.

Belly buttons can even change shape into adulthood. The expansion of the belly during pregnancy can temporarily change a woman’s innie to an outie. In fact, some expectant moms are diagnosed with an umbilical hernia if the protrusion is particularly significant, but most women see their belly button return to its original shape after delivery.

At the end of the day, the shape of your baby’s belly button is inconsequential, but it’s next to impossible to resist the guessing game about every precious little detail of your impending arrival.

Your baby’s innie or outie belly button will be just one of the many discoveries you’ll make and fall in love with when you meet him for the first time.