Do Baby Books Have All the Answers? 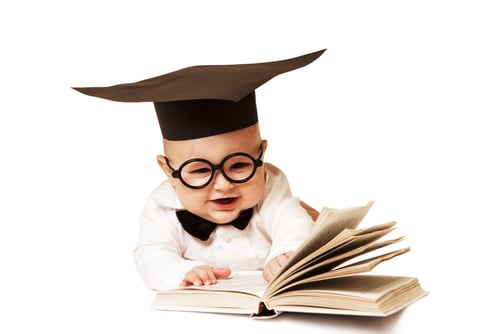 I am a sucker for fads. If there is a new trend in fashion, exercise or cultural thinking, I hop on the bandwagon. I enjoy being au courant. So when I became a parent, I surveyed the scene, identified the major theories and got to work putting them into practice.

One mom’s thoughts on “doing it by the book.”

I was a pro at swaddling, sleep training, attachment parenting and babywearing—all before my son hit 3 months of age. I would pack my infant into his expert-approved baby carrier and head to my local bookstore, where I scanned scores of parenting books, each chock full of helpful, take-home messages.

The books held an incredible appeal because they made the unwieldy business of parenting seem manageable; the bullet-point lists carved some semblance of order out of the sheer chaos of sleeplessness, colic and diaper rash. Giddy with the prospect of having cracked the case, whether it was night wakings or nursing strikes, I’d buy a book, break down the new strategy for my husband and begin applying the principles immediately.

So imagine my dismay when none of them worked. I used the cradle hold and the cross-cradle and the football hold to get my son to nurse, but he didn’t latch on until he was good and ready, my engorged milk ducts be darned. I’ve tried the no-cry sleep method and the some-cry and the lotta-cry, and still my 1-year-old wakes between midnight and 5 a.m. every night.

I’ve tried positive reinforcement and verbal restraining, but the only thing that stops my son from running into traffic is the toddler leash that I attach to him. In my search for the one magic theory that would make everything fall into place, I spent enough hours studying to conclude that this Holy Grail of Parenting Perfection does not exist.

That is not to say the theories don’t help or that they are all the same. As new parents, we need the guidance they offer. But ultimately, I’ve had to cobble together my own approach, a Frankenstein theory with parts patched together from dozens of leading and competing experts.

If I were to write my own how-to parenting book, it would be called Parenting by Hook or by Crook: Get the Job Done and Live to See Another Day. I would include chapters like:

But I’m far too busy chasing my son out of traffic to write a book. So I’ll leave it to the experts.

Previous Post
World Population and Children: How Many is Too Many?
Next Post
Kate Middleton Pregnant?
Nicole Caccavo Kear
Nicole Caccavo Kear is a writer and mom in New York City who still can’t quite kick the how-to habit. Read more of her work at www.nicolecaccavokear.com.

10 Tips for a Good Night’s Sleep with a Newborn